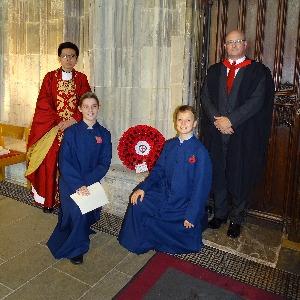 Assembly this morning took place in St George’s Chapel where pupils remembered members of the armed forces who died while serving their country. The Chapel was decorated with poppies which had been made by the pupils themselves. Following the service, the Head Boy and Head Girl moved to the North Naive Aisle and laid a wreath beneath the window which commemorates pupils of the school who died in the two world wars.