At St George’s we encourage critical and creative thinking in order that our young people are properly prepared with the skills that will enable them to make informed decisions on many issues which have a scientific basis and which will affect their lives, eg global warming, genetic research and many others.

“Science is a way of thinking much more than it is a body of knowledge.”

Much of the teaching is hands-on, giving pupils an opportunity to develop practical skills and nurture a sense of enquiry. The pupils are encouraged to think scientifically, ie formulate questions and to develop ideas on how to arrive at a meaningful answer. Pupils design and perform fair, reliable and controlled experiments, observe and measure, and learn to record their results in tables and graphs. They learn to analyse data and to draw realistic conclusions through critical reasoning and the evaluation of evidence.

The department invites speakers from various disciplines such as Astrophysics and Forensic Science. We organise a range of school visits to places nearby such as the Science and Natural History museums in London and Oxford, the Winchester Science Centre and Planetarium, and the Natural History Museum in Eton College.

Last summer Year 7 pupils took part in the national investigation into the effects of microgravity on rocket seeds which had been taken into space by Tim Peake. Their observations were collated on a national database. We were also visited by Space Ambassador, Mrs Joy Stone, who brought with her a replica of the Sokol space suit worn by Tim Peak and his fellow astronauts, and explained the vital role it plays.

The department runs a Science Club and a thriving Astronomy Club which continues throughout the school year. With the aid of robotic telescopes around the world, the pupils are able to make observations and take pictures of planets, nebulae and galaxies. It is our aim to make every pupil’s experience of the subject both fun and rewarding.

Pupils are encouraged to follow links to the International Space Station, NASA and Mission X:

World Space Week, celebrated from 4 - 10 October each year, is the largest space event on Earth. At St George's the children celebrated the event with a whole raft of inspiring lessons and activities designed to increase their knowledge of the solar system. The...
Read More 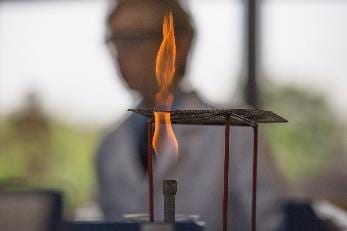